Nate Wessel lives in Cincinnati, Ohio where for the last few years he's been working to improve public understanding of the local transit system. In 2011 he designed and published his own map of the system  and he now writes the Cincinnati Transit Blog. Nate has a degree in urban planning from the University of Cincinnati from where he graduated this past June.

I've heard quite a few times that Google Transit and similar technologies have made hand-rendered transit maps outdated. Being myself a maker of hand-made, tangible maps and having spent the last couple of years physically working with a lot of maps, I find myself with a bit of a gut reaction to this common claim.  It's more than just a reaction to an existential threat though. My reaction is to an idea that would toss the baby out with the bathwater. Not only are lovingly created, tangible transit maps incredibly valuable to our understanding of the cities we live in, they're essential to the widespread use of transit. We'll need to go back to basics.

What do maps do? What are maps? Why are they?

Maps are like Cliffs-Notes for the physical world. We don't have time to read the whole book but we still need to get an idea what it's about before the test. You'll probably never manage to explore the entirety of one mid-size city let alone a country or the whole world. Yet we still want to see what's out there, where we could go if we wanted to and what we'd find when we got there. Understanding the shape and nature of the whole world or even one city through direct physical experience is a practical impossibility.

We all need an understanding of the world beyond our fingertips; that's absolutely essential to modern human existence. It's why we have novels, to pick one example. A story from another life lets us share an experience we haven't yet had and perhaps never will. It lets us plumb the depths (and heights) of our own emotions and thoughts by momentarily opening ourselves up to the author's. We don't necessarily have to go there ourselves to learn something of love or sorrow(or downtown). Our innate curiosity pulls us to see what's possible in the world and within ourselves.

The same goes for everything on TV, in print, and many things on the internet. Most media lets us reach beyond our own personal experience to learn something of the world we can't see directly. We absolutely need these things. They give us an understanding of the broader world and let us contextualize our own existence. They show us what's normal, and more importantly what's possible for ourselves; where we can go and what we can do. Kids can't dream of being astronauts if they've never heard of one. We can't speak seriously of knights in shining armour and chivalry and honor and of other deeply interesting ideas until we've read of their existence and felt something of it ourselves. In exactly the same way maps show us what's possible in the physical world. They tell us that Spain is a place in Europe, that Queens is connected to Manhattan by subways and bridges, and that it's not similarly connected to Britain. We can't think of taking transit until we know what transit does and doesn't.

The other critical thing maps (and some other media)do is provide us with answers to specific questions. These might be:

Filling this need for specific information is in part why the encyclopedia was so revolutionary during the Renaissance and why the internet can be so powerful today. The amount of precise information available to people is just exploding. The age of science and empiricism has given us the idea of bulk 'information' as something that can succinctly and precisely answer an isolated question. "Where is the nearest bike shop?" We now keep stock of them in a Google database that can return the answer in milliseconds. Often you can ask the most esoteric questions of the Internet and find a succinct and satisfying answer in less than a minute. That's stupendously useful for travellers and college students with deadlines.

So maps (and other media generally) have two big functions: First to inform broadly and second to answer specifically. The informative function must necessarily precede the precise answering function. We need to know what's generally possible before we can know what exactly to ask. We need to know that transit is even an option before we can ask how exactly to use it.

Answering specific questions with specific answers is what Google Transit does well. Here's how it works:

In many circumstances, this is quite useful. Many people, if they're taking a one-time trip to somewhere they don't normally go, will just want a quick answer; if the trip is possible, a computerized map can tell them exactly how to get there and exactly how to get back. That's often a very handy thing.

But Google Transit totally misses the first function of maps: informing us about the world, sating our curiosity, and showing us the possible. Google transit doesn't tell us anything about where transit goes generally. It makes us ask questions like "how do I get from exactly  here to exactly there right now?"

Without a basic understanding of what's possible it's left to hope that "here" is a decent place to start and that "there" is even a realistic possibility. Downtown Cincinnati for example has transit operating on just about every street, but you can't even spot it in the Google Transit interface before inquiring about a specific trip. 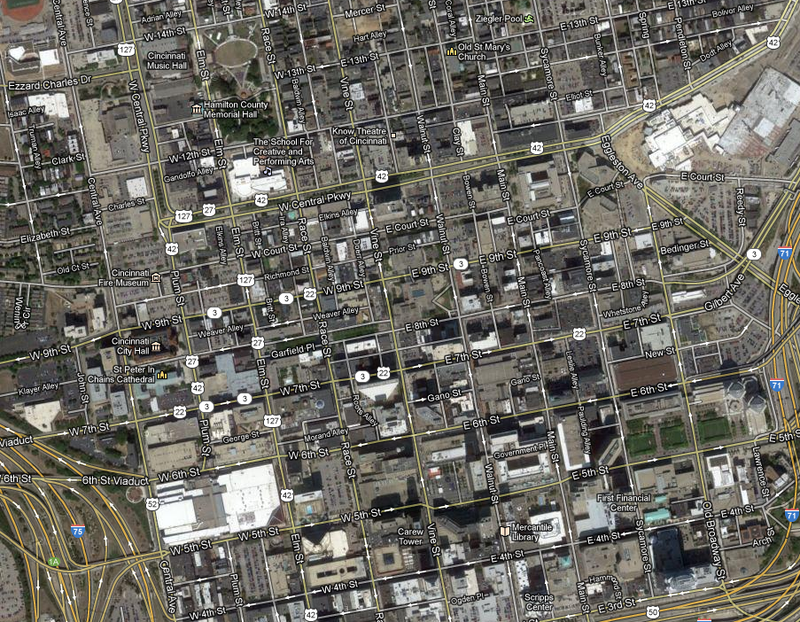 When we ask questions without knowing that a reasonable answer even exists, we're sometimes confronted with answers like "no results" or "there's one trip three days from now at 3:29am". Without a broader understanding of how the whole thing works, we don't know what to ask or if the answer we got doesn't sound right. Worse, when we get these disappointing answers to the wrong questions, we get confused and frustrated. Transit users need more guidance than "not possible" or "how about Tuesday?"give us. Also, some specific answers that serve us well for the moment will be misleading in the future. Here for example… 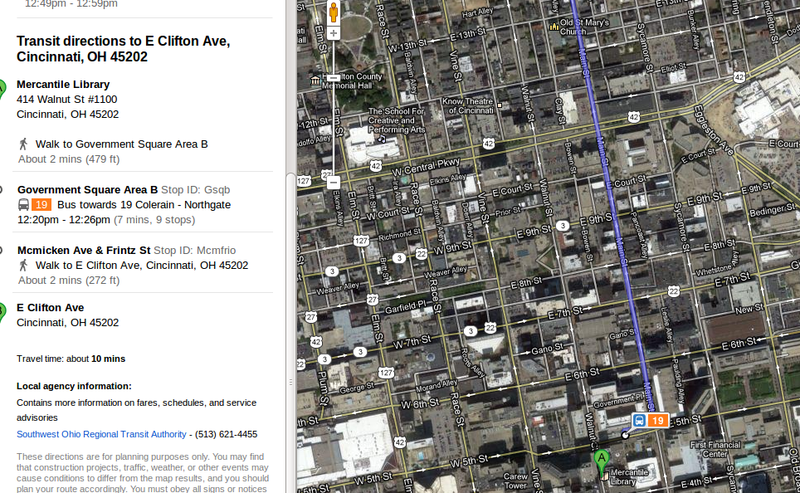 …Google Transit suggests we take the #19 northward, but says nothing of the invisible #17 that runs parallel to it at more than twice the frequency. You can easily imagine someone who's once looked up their route on Google Transit regularly letting a #17 pass by while they wait for a #19 and complain about headways. Similar situations must happen a thousand times a day.

Exploring a transit system with Google Transit is like blind men trying to understand an elephant by touch. This part is thick, this part is bumpy, we don't know how any of the parts attach to each other, and the whole thing is constantly, inexplicably moving. A thoughtfully hand-rendered transit map tells us what the elephant really is. It doesn't go into detail about the dimensions of it's toenails, but tells us of it's overall size, shape and temperament. It tells us that you might be able to ride the thing and that you probably don't want to try poking it with a sharp stick. Once we know these basics we can begin to ask exactly what the trunk is for.

That's why hand-rendered system maps continue to be completely relevant in the heyday of the computer. A map like that of DC's Metro tells us more about the city and how to use the transit system than any GTFS feed ever could on it's own. 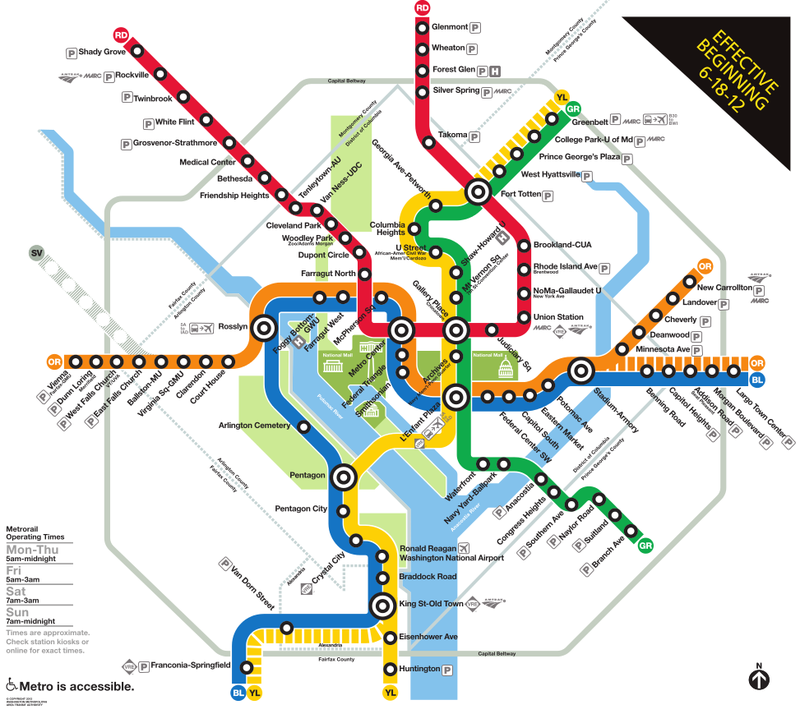 A hand-rendered map must necessarily simplify a system, showing only some lines and only some landmarks. To do so it makes value judgements, something a computer has never yet been capable of. It does most of the hard work of understanding for us because a map-maker must understand the transit system before he can make a map of it; it's not just a matter of dumping all the routes into a GIS program. That deeper understanding of the transit system is an experience most people don't yet have and it's exactly what they're looking for when they explore a system map. Similarly, when they explore a novel they may be looking for a deeper understanding of the human condition, history, or their own lives. In either case, they're most essentially looking for their possibilities. "What is there?" "What is within my reach?" What is possible for me?

It seems like most big American cities put these questions, at least so far as transit is concerned, largely to rest decades ago with their famous metro maps but that many small and mid-sized cities, particularly those that primarily use buses, provide little if any coherent, holistic map of how their system operates. They often seem content with either no system maps at all or only topographically accurate maps that de-emphasise and confuse the areas that can benefit from transit the most: those that are dense and well served by multiple lines. 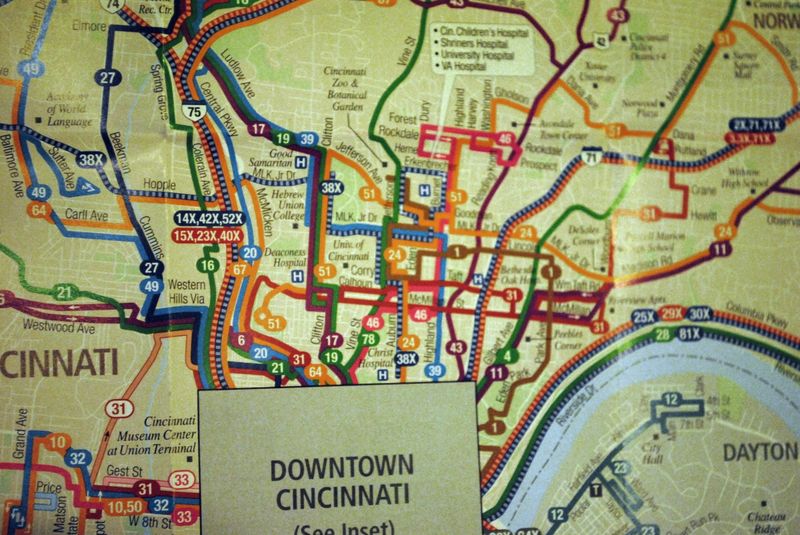 Dense areas by definition get less space than their human value warrants on a topographically accurate map. Every famous transit map, whether it's DC's or New York's or London's does just the opposite; exploding dense, important areas like Downtown Manhattan and condensing suburban service. They do this not only because that makes them easier to draw, but because that emphasis on the dense is typically the actual emphasis of the transit system itself. A map that embodies the logic of a transit system is one that tells us most truly how the system works and most basically what we can do with it. We need something of that understanding before Google Transit can work well. We need to know what the elephant is.

But that deep understanding of a transit system and of a city is so different for each system that no computer program could ever yet describe every system well.  Google maps can't yet do it. It's something that just can't be automated.

Google Transit can give us the answers but it can't give us the questions. And that's why it will never be enough for a transit agency to publish schedules to Google Transit without also publishing a substantial and thoughtfully developed system map made by people who are more than passingly familiar with the transit system and with the city.

9 Responses to guest post: nate wessel on why google transit will never be enough for small to medium-sized systems

You are here: Home › guest post: nate wessel on why google transit will never be enough for small to medium-sized systems