Google could transform how many people experience transit in about 15 minutes.  Well, maybe a few days.  They have the tools to do something that's a big effort for the transit agencies: Frequent Network maps.

But in fact, any app-maker could do it too.

Nate Wessel's guest post, on why trip planners can never replace or substitute for maps, gives us the clue. 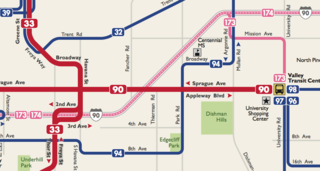 For the last three years, this blog has been preoccupied with the visualization of frequency. Frequency is freedom.  Reducing the wait is the essence of what makes transit resemble the freedom we associate with cars, and it's also crucial to allowing multiple lines to function as a network.

As this comes to be better understood, the concept of frequent network mapping is gradually spreading through the transit industry.  I first made the case here, and explored some details here.  The idea is spreading.  If you don't believe me, just explore this blog's Frequent Networks category (let me know if you encounter other examples I should feature).

Frequent lines are so special — as the network useful to busy people who can't build their lives around a timetable — that they need to stand out.  If you haven't seen a map of the Frequent Network in your city, I contend that you really don't understand how your transit system works.  As I argue at the links above, frequent network mapping can be transformative in helping people understand how a transit system actually functions, and why frequency is worth caring about.

As Nate argues, and as I argued a few years ago, no trip planner will ever substitute for maps. What's more, no map of a single trip we care about will substitute for a map that actually shows you the network, just as most of us need to see maps of our city.  The Frequent Network is especially crucial to see, and not just for the general public.  Powerful people form ideas about transit from looking at maps, and if they can't see frequency, they are being misled about how the network works.

Still, it takes time for ideas to penetrate a transit bureaucracy.  Google, though, could do it tomorrow, by just setting up a little interface that reads midday frequencies out of the timetable data they already have, and draws a Frequent Network map.  OK, quick automated mapping is often ugly.   It might take a few weeks to make it beautiful.  You might also want to give the user control of the frequency threshold.  Service every 15 minutes is frequent in Phoenix but not in San Francisco.

Actually, it doesn't even need Google.  Given public GTFS feeds, anybody can build this app, right?

Imagine arriving in an unfamiliar city and wanting to see where you can get to easily on transit.  Or imagining thinking about a location decision, and wanting to make sure there's frequent service there, going to the places you go.  Simplistic tools like WalkScore's Transit Score won't help you!  You need to see the network yourself.

Imagine that the resulting map is so useful that it comes to replace the convoluted transit information in most travel guides, which can't do much more than draw a map of a subway system, or give you a bunch of phone numbers if there isn't one.  Tourists, too, don't like waiting long.

What am I missing.  If this makes sense, give me some credit for the idea, and take it away.

guest post: nate wessel on why google transit will never be enough for small to medium-sized systems
a new wiki for transit!

8 Responses to how google (or you) could change the game

You are here: Home › how google (or you) could change the game