Evan Landman is an associate at my firm, Jarrett Walker & Associates, and serves as a research assistant and ghostwriter on this blog.   He holds a BA in Human Geography from University of British Columbia and was formerly an intern for the Portland area regional government, Metro.  He tweets on transit and other Portland topics at @evanlandman.

For as long as I can remember, every bus trip in Portland has started with the counting and recounting of small bills and change held in a sweaty palm, always with the low-level anxiety from the thought of dropping a quarter and being unable to board. Pay your fare at the farebox, recieve a flimsy newsprint ticket. Secret that ticket in a secure pocket, to prevent it from being carried away by a stray gust of wind. If you have to transfer, check your pocket every 30 seconds to make sure it's still there.

TriMet, the transit agency here in Portland, finally launched their long-awaited smartphone app on Wednesday. I've tried it out for most of my trips since, after a summer spent jealously reading tweets from people lucky enough to be invited to the beta test. My first impression: this application suddenly makes using Portland's bus system much more relevant to me, and I suspect to many others. 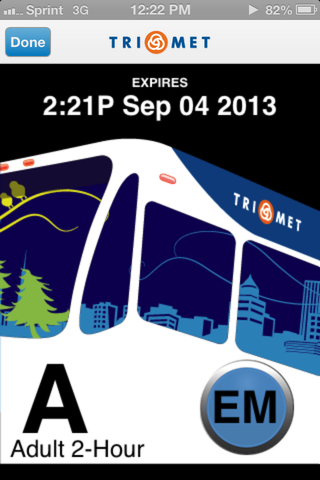 TriMet's ticketing application was developed by a company called GlobeSherpa, which is in the business of building mobile ticketing software for clients like sports arenas, concert venues, transit agencies, and parking providers. TriMet didn't have to lay anything out financially in developing this tool; angel investors covered those costs. GlobeSherpa skims a percentage off the top of each transaction.

The app is free to download, but once you've got it, you'll have to use a credit or debit card to buy electronic tickets at the usual price. To use a ticket on a trip, you simply press the "use" button, and an animated ticket screen appears. It's as easy as showing this screen to the driver upon boarding; no need to fumble for change or a flimsy paper transfer. This screen remains animated as long as the ticket is good, and shows the exact time at which it expires. It is even possible to use multiple tickets at once, a valuable feature for parents and caregivers.

I'll admit that since relocating back to Portland in 2012, despite living without a car, I have rarely used TriMet's bus network. This is not because it doesn't go to the places I need to travel to, or because it is too infrequent; rather, I simply do not often find myself in possession of change or small bills, and generally choose modes that don't require those things. I pay for most everything using a debit or credit card, because it allows me to track my funds with more accuracy, and because the rounding error that is change adds up over time, but is difficult to spend, keep track of or incorporate back into my accounts.

The agency is no doubt targeting young adults like me in developing this product. Numbers from Pulse, a research arm of Discover, find that members of the Millenial generation have the highest rate of ownership of debit cards (80%) and of contactless payment devices (12%); and the highest rate of online micro payments.

Lest I be accused of spreading propaganda for the agency, it is worth acknowledging that this is a tool useful only to people who have both a credit or debit card and a smartphone. As of May 2013, according to Pew, 56% of Americans had a smartphone, which means that 44% did not. Rates of ownership track with income and educational attainment, but are most strongly correlated with age. This sort of payment system largely excludes seniors, among whom only 18% report ownership of a device capable of running the software. As you might expect, many more Millenials (81%) own smartphones.

Freedom of mobility is a frequent topic here at Human Transit. How well does the network design and operation enable a person to move around the city? How well do the transit agency's materials communicate the possibilities for personal mobility? How does the agency make transit a reasonable choice? In the age of Amazon, Paypal, and in-app purchases, giving riders the option to pay in this way is an important step towards creating a truly civilized transit experience.