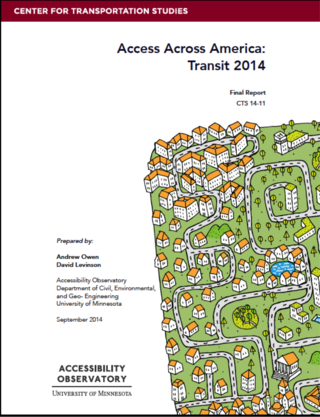 There should be nothing amazing about a new report on how easy it is for Americans to get to work on transit, but there is.   Think about all the arguments we have about transit …

… and ask: Why do we try to discuss these things in the absence of good analysis of the most basic question of all:  Is transit useful?  Does it help people get places in at a time and cost that's a logical choice for them?  Such information is often hiding inside ridership models, but it's rarely revealed in a way that lets people see and discuss it.  Without that, it's hardly surprising that the American transit debate is so confused.

Access across America: Transit 2014, from the University of Minnesota’s Accessibility Observatory, describes how easy it is to get to jobs in America’s major metro areas by way of transit plus walking.  (For very short trips, it shows what can be reached by walking alone.)   The authors are Andrew Owen and Professor David Levinson.  The report is meant to sit alongside similar studies for the other transportation modes.

So here’s Portland, say, shaded by the number of jobs that can be reached within 30 minutes from each point in the city: 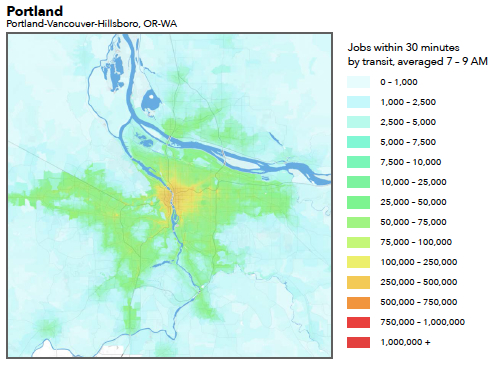 The report also offers a ranking of how easy it is to get to jobs for the average residential location in all the major metros.  The ranking looks at where you can get to in a range of travel time budgets, from 10 minutes – basically a measure of walk access – to as much as 60 minutes.  Here's are the top 17: 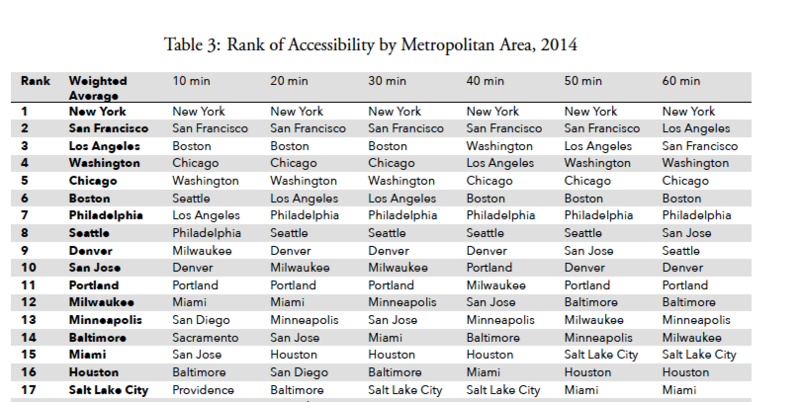 As the travel time budget rises, the relevance of transit to economic opportunity becomes visible.   Los Angeles, with long access distances but extensive frequent transit, does poorly on 10-minute walkability but climbs in the rankings as you consider longer travel time budgets, thanks to its effective frequent transit grid.  Miami drifts in the other direction, signaling that compared to Los Angeles, transit there is adding relatively little to access to jobs beyond what’s achieved by walking alone.

Now here's what's amazing for a study pubished in 2014:  Owen and Levinson claim (p 6) that this study is unusual in properly accounting for frequency.  Many analysts approach transit from the point of view of the nine-to-five commuter, who was presumed to be largely insensitive to frequency because they have made an appointment with a particular scheduled trip that they take every day.   This sometimes feels right to bureaucrats and civic leaders, many of whom have such commutes themselves, but out there in the larger economy, more and more people work part time, or at irregular hours, or at times outside the standard commute peak.  Increasing numbers of people also value flexibility and spontaneity even in work trips — things that only a robust all-day frequency can provide.

Perusing these maps and rankings, my overwhelming reaction was “what if they’d analyzed it like this, or graphed it like that?”  A huge amount of insight is readily available out of this database if we query it differently.  For example:

Still, this is a great piece of work.  And Americans should pause over the core of this announcement:  Only now, in 2014, are we starting to study people’s ability to get where they’re going, and their opportunity to access all the opportunity that makes a great city.