Research by Lawrence Frank, Bombardier Chair in Sustainable Transportation at the University of British Columbia, looks at neighborhoods in King County, Washington: Residents in areas with the most interconnected streets travel 26% fewer vehicle miles than those in areas with many cul-de-sacs. Recent studies by Frank and others show that as a neighborhood’s overall walkability increases, so does the amount of walking and biking—while, per capita, air pollution and body mass index decrease.

I especially appreciate this graphic, because it’s a nice illustration of a crucial transit concept: the radius of demand:

(The image on the left happens to be Woodinville, a suburb of Seattle, while the one on the right is Seattle’s Ballard district.  But they could be any comparison of c. 1950 and c. 1880 street networks in the New World.)

Imagine that the red dot in the center of these images was a rail rapid transit station, as these can generally draw walk trips from a radius of about 1 km.  Most planning maps that you see will simply draw a circle of 1 km radius around the station, and call that the “catchment” or market area of the station.

A circular radius of demand is often called an “air distance,” or as we used to say, “as the crow flies.”  Humans, however, have to go around barriers.  These include not just major walls such as a freeway (the wide orange line in the left image) but also simply the absence of a path in the desired direction.  So the real radius of demand is defined by the network of streets and paths.  Actual walking distances along the road network are indicated in blue.  Until recently, you didn’t see these diagrams often in planning studies, because walking paths were just too complicated to calculate.  Now, thanks to increasingly rich GIS databases of pedestrian networks, it’s getting easier.

The beauty of fine-grained grid street patterns (not to be confused with the beauty of transit network grids) lies in your ability to reach most of the area of the 1 km circle in a 1 km walk along the network.  We can’t expect any neighborhood to offer a 1 km walking distance to any point on a 1 km circle.  (Such a goal would fill the entire area of the circle with needed walking paths, leaving no room for a city.)  But the classic grid structure of streets is remarkably good at maximizing the walk radius while still leaving space to build things.  In the image above, the walkable radius in the suburban cul-de-sac street pattern on the left is less than 30% of the area of the circle, while in the fine-grained inner city street grid on the right, it’s 64% of the circle.

Transit, in short, has a direct interest in steps to increase the permeability of the street network, steps that make a street network more like the map on the right and less like the one on the left, because such changes enlarge its market.  Cities that value transit (or walking or cycling for that matter) should be looking for strategic interventions where small additional segments of ped-bike path can dramatically shorten ped-bike distances and thus expand the actual walkable radius of demand around a transit station or stop.

Here’s an example from Hayward, California, which I remember from my brief 1990 stint at AC Transit: 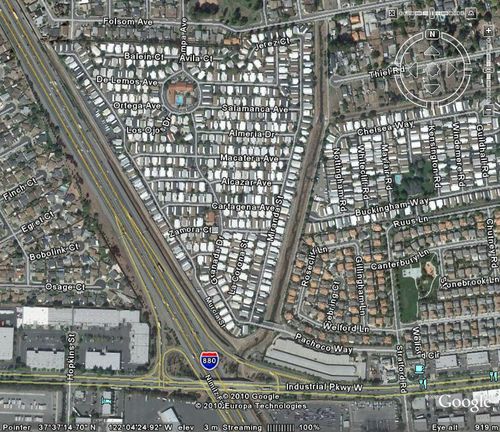 The triangle in the center is a large mobile home park.  It is about 750 m in extent from north to south, and bounded by the freeway on the west and a fenced drainage canal on the east.  The only street nearby on which you could run a reasonably frequent transit service is the east-west arterial on the bottom of the image (Industrial Parkway).  (The local bus system actually does something more complicated than this, but that’s beside the point.  Clearly, if you were trying to run relatively fast and efficient bus routes, you’d stay on major arterials like Industrial Parkway, and focus on improving the pedestrian access there, rather than driving on much slower and more circuitous paths into the surrounding neighborhoods.)

At the very bottom of the triangle is a bridge over the canal.  My recollection is that in 1990, that bridge wasn’t there.  Regardless of whether that’s true, the point is that if the bridge weren’t there, almost everyone in the mobile home park would be more than 400 m (1/4 mi) walk from Industrial Parkway even thought most of the park is within that air distance.    This kind of situation was built all the time.

The little bridge at the southern tip of the park obviously changes everything.  Now, most of the park has a reasonable direct walk path to a stop on Industrial Parkway.  That’s better mobility for the people who live there, for access to nearby commercial as well as to transit.   I point to this bridge because it’s the kind of small intervention that cities and local transit advocates should be looking for.  It doesn’t have to be a street, of course, just a pedestrian link.  Such links can do a great deal to re-connect highly disconnected suburban street patterns, and thus bring much larger areas into the walk radius of transit.

To see the effect of an abundance of these links, here’s a slice of Australia’s sprawling national capital city, Canberra.  Even in the most car-dominated and sprawl-loving era, Canberra has always maintaned an ethos of connection to nature, and has manifested this in abundant park strips — most of them also off-street bicycle paths — lacing the city.  These paths completely change the game.  Here’s a bit of the Canberra district of Florey, designed in the 1970s.  It’s at the same scale as the slice of Hayward above. 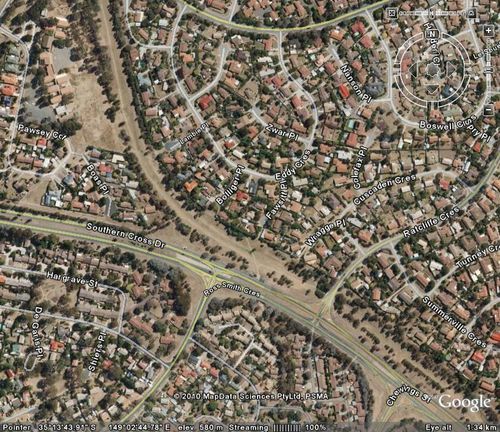 The east-west arterial across this image is a very important street for the transit system.  In fact, our Strategic Plan for Canberra’s public transit identified it as a bus rapid transit corridor.  Right now, it’s a big fast arterial, but notice that as it turns into a transit corridor, its stops will have very easy access into the surrounding suburban fabric, even though that fabric is made of classic car-oriented design.  The key is that while there are plenty of cul-de-sacs, they are almost always “pierced” by a pedestrian link that allows people to keep walking in a desired direction.   Zooming in, you can see these links into the parkway corridor from each of the cul-de-sacs at the top of the image: 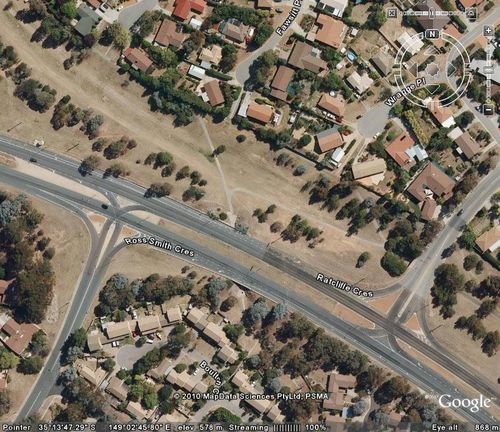 In short, this structure is a labyrinth for cars, as cul-de-sacs are meant to be, but for pedestrians and cyclists it’s more like a grid.  Every city should be looking for places where they can retrofit this sort of pedestrian connection.

You are here: Home › Cul-de-sac Hell and the Radius of Demand