One of Bus Rapid Transit's great virtues is that unlike rail, you don't have to build a complete, continuous piece of infrastructure if you really only need segments of one.

Here in Portland, for example, the Barbur corridor — now being studied for BRT or rail — features a series of congested chokepoints with generally free-running traffic in between them.  Here, a BRT facility that got transit through the chokepoints reliably probably wouldn't need an exclusive lane in the free-flowing segments, because traffic in those segments would continue to be metered by the chokepoints and thus remain uncongested.  (Congested chokepoints meter traffic just as ramp meters do: they limit the rate at which cars can enter a road segment and thus reduce its chance of becoming congested.)

Unfortunately, Bus Rapid Transit can also be implemented in exactly the opposite way.  Severely congested chokepoints are generally expensive places to design transit priority for, especially if you're unwilling to simply take a lane for transit.  So we often see BRT projects that are missing where they are most needed.  The Boston Silver Line 4-5, like the Los Angeles Silver Line, can get stuck in traffic downtown.  New York's supposed BRT is so compromised that many refused to call it BRT anymore.  Even the world-class Auckland North Shore Busway disappears as it approaches the Harbour Bridge.

Now we have the example of Seattle's RapidRide D, highlighted today by Mike Lindblom in the Seattle Times:

While the new RapidRide bus mostly lives up to its name in West Seattle, passengers on its sister route to Ballard are routinely stuck in traffic.

The service to Ballard, called the D Line, is d 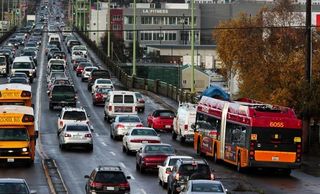 elayed 10 to 15 minutes by late-afternoon car congestion leaving Belltown and winding through the crowded Uptown neighborhood, near Seattle Center.

That bottleneck is aggravated by traffic signals that haven't yet been re-timed by King County Metro Transit and the city of Seattle, to give the buses a longer or quicker green light. Metro acknowledges the D Line is just one minute faster than the local bus it replaced Sept. 29; the advantage is supposed to be six to eight minutes.

Transit managers hope to make gains by early 2013 after signal and road-lane changes are finished.

"We have a ways to go based on our early experience, but it is still too early to know whether the projection will be achieved," said Metro spokesman Jeff Switzer. 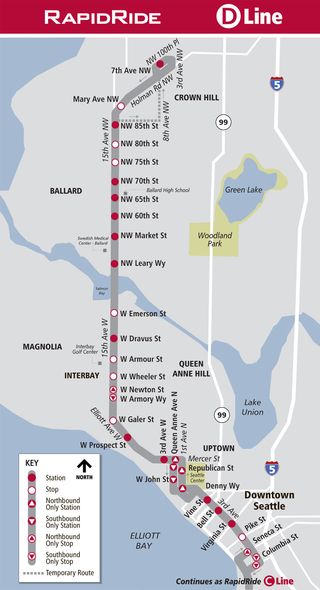 Just one minute faster than the bus it replaced?  Then the question arises: Why was it called Rapid Ride prior to the improvements that would make it Rapid?  There are some plausible if grim answers to this question.  Getting multiple big bureaucracies to move on the same timetable to the same deadline is hard.  The transit agency has to commit to a date months in advance, without being entirely sure whether its partners (typically in the City and the state Dept of Transportation) will be done with the improvements that are their responsibility.  So sometimes, the brand appears before the product does, causing this understandable blowback and also, more critically, tarnishing the brand.

RapidRide D raises a larger problem though.  Even when planned priority is completed further south there is still the problem of the congested Ballard Bridge.  Like Barbur's chokepoints in Portland, the Ballard Bridge is a familiar chokepoint that affects speed and reliability for all transit services forced to use it.  You can imagine the difficulty of demanding that RapidRide have an exclusive lane over the bridge, when that would leave only one for other cars.  (But what about a lane for buses + carpools + carshare cars + electric cars + etc. until you get a reasonable but uncongested lane volume?)

Sometimes, too, bridges can be metered, much the way the San Francisco Bay Bridge toll plaza meters traffic on that bridge.  At the approach point pictured above, a signal could have been placed at the bus merge point which meters traffic so that northbound congestion piles up south of the bridge rather than on it, and enters the bridge only at an uncongested rate.  That would have allowed buses uncongested operation without really slowing down cars much.  I'm not an engineer; there may be valid reasons why this wasn't possible, but it's the sort of solution that comes up when congested traffic is the reality anyway and the goal is to protect transit from it.

Transit agencies sometimes compromise BRT for their own reasons of budget.  Issues of boarding time associated with the lack of on-street ticket machines are coming up on RapidRide, as are concerns about reliability arising from the fact that two RapidRide lines are through-routed, transmitting delay from one to the other.  These are familiar struggles within transit agencies who are under pressure to spread a product over many corridors and can't afford to deliver every aspect of the product in all those places.  The result runs the risk of becoming symbolic transit; a bright red line appears on the map, but without the investment needed to make good on the promise that the red line implies.

I've received emails from Seattle friends on several sides of this issue, and sympathize with all of them.  I don't mean to criticize either the City or the State DOT or the transit agency, because what was done here is fairly typical historic American practice and the pressures involved are so routine.

But if there is a desire to aim higher than historic American practice, the question remains.  How much can we compromise BRT — tolerating its absence precisely in the congested chokepoint where it's most needed — and still call it BRT?  Might be better for transit agencies to refuse to implement BRT until the relevant traffic authorities have delivered the facilities it requires?

toronto: a frequent network map
quote of the week: governor brown on etymology

You are here: Home › the opportunities and dangers of incomplete bus rapid transit