Posted on May 22, 2013 in Frequent Networks, Maps, Simulation

Many transit agencies subscribe to the idea of "Open Data", publishing bundles of information on the system. These feeds contain data on stops, routes, arrival times, fare information, headways, and other pieces of useful data. Even more interestingly, these feeds often have buried within them the ability to access vehicle GPS data, which provides the ability to find out where a transit agency's vehicles are in near-realtime (limited by the speed at which these location queries can be returned).

Developers have long used feeds published by transit agencies for trip planning applications, which are useful in the extent that they can tell you when you need to be at your stop to get to your destination. However, this information source has always contained within it the potential for much more emancipatory uses. Recall Nate Wessel's guest post here on the shortfalls of Google Transit.

Recently, an innovative new use of this technology has begun to be deployed. In Portland, Seattle, London, San Francisco, and perhaps elsewhere, developers have taken the data provided by transit agencies and done something revolutionary: drawn maps of where all the transit vehicles are at any time. 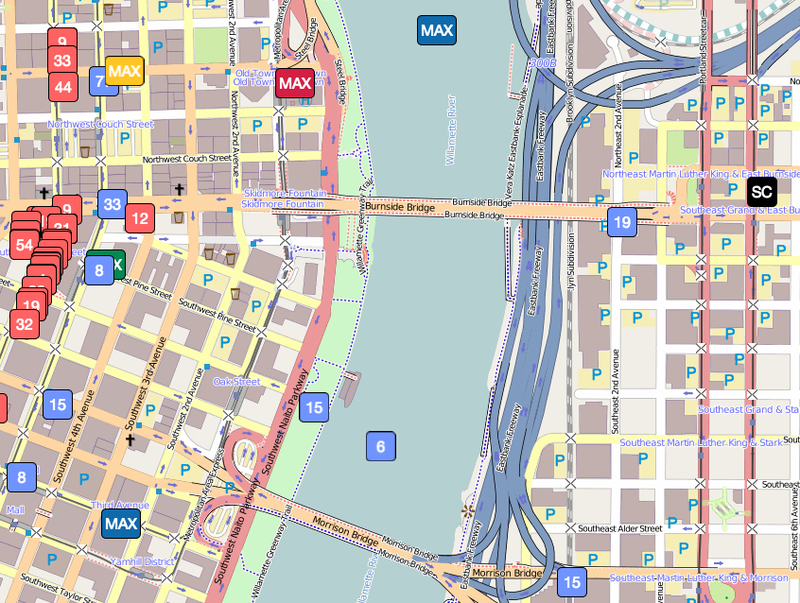 Obviously the image above is a still from a map whose utility depends upon its continual movement- I encourage you to visit the site to see for yourself. A consistent symbology seems to be emerging, where two colors represent inbound and outbound service – in this case red is going out, and blue in – with separate colors representing the different technologies present on the map.

Browniefed over at github explains how this all works:

Buses are using short wave radios to transmit there position. They currently send updates every 30 seconds, and TriMet sees the update about 3 seconds later. Each bus gets a turn sending it's position and works like a tolken ring network. Previously it took 90 – 130 seconds and if a bus missed it's turn then it would be double that time (meaning for 1-5 minutes they would not know the position of a bus)

Buses do not actually send GPS coordinates back, what they do send is distance traveled along their trip. They do use GPS but primarily they are using the odometer for tracking position. There is also a door sensor, to verify that a bus is at a stop. There are all sorts of calibration issues with the odometer and drivers have reported that the vehicle is not updating its schedule adherence until the door opens.

So this is cool, but is it useful? How does having access to the realtime position data improve the user relationship with the transit system? These maps don't give any indication of how soon a bus is coming, or how long you will have to wait for it. They don't tell you where the bus is going, beyond showing the position of the next bus up the line. Of course there is no way to determine the time interval between your stop and the position of the bus icon. As a trip planning tool, live bus maps are next to useless.

However, as a method of communicating the shape of the entire network, live bus mapping does something very interesting. It translates frequency into a very simple unit- number of buses. A map reader can see very easily which parts of the city have a lot of buses, and which have few; which places have overlapping services or an interlocking grid, and which are provided only infrequent lifeline routes. Perhaps this technology could someday be integrated or displayed alongside isochrone visualizations as part of a map of the freedom of mobility afforded by a system, but to my eyes, for the moment this is a very technically accomplished curiosity.

8 Responses to real-time transit mapping: watch your system in motion

You are here: Home › real-time transit mapping: watch your system in motion