In my long experience redesigning bus networks, it’s been rare to see a team spend years talking with people, studying reams of data, and developing a design through many iterations, only to have the result be nothing.  Most designs I’ve worked on have either been implemented or at least been the basis of some improvements.

Adelaide, Australia, however, has just abandoned a thorough redesign of its network.  It was a political decision, in which the Premier of South Australia overruled his own Minister of Transport, who had proposed the changes.    (I was not involved in this project.)

The basic idea of the plan was to reorganize services into a simpler pattern with far less complexity and far more frequency — which is what high-ridership redesigns (like the projects I worked on in Auckland, Houston, and Silicon Valley) do.  Such a revision will typically delete stops that are too close to other stops, and may ask people to walk to frequent service on a nearby main street rather than having infrequent service closer to their door.  It may require some people to change buses who don’t have to do so now.

The result of the proposed simplification is typically a dramatic expansion of the high frequency network, which in turn means a network that provides faster door-to-door travel times and is easier to learn, remember, and explain.

Here’s a slice of the existing Adelaide network.  Lots of infrequent routes, but none of them are likely to be coming when you need them. Here’s what it would have looked like under the new network.  Here, red lines are likely to be coming whenever you need them — they run every 15 minutes all day — while blue lines come every 30 minutes.  (Oddly enough, this is the same color scheme that we use in all of our maps!) If your goal were higher ridership, or maximizing where people can get to in a fixed amount of time, this kind of network design would do that.    (Again, I was not involved in this design, and am not endorsing the specific design choices.)

But even if you do everything right — even if you do the right engagement, analyze the data well, and come up with the best possible design, people will scream.  That’s because many riders are used to the system as it is, and have no interest in how the network improves access to opportunity for anyone but themselves.  It doesn’t matter how useless the existing network is.  Some people use it, and they will defend it, and the negative feedback is always louder than the support.

Almost all journalists will tell the negative side (Rage! Recriminations! A chance to paint leaders as incompetent!) because it just gets more clicks than the positive side (More people can get to more places, especially disadvantaged people! More people will ride! Less car traffic and pollution!)  So of course, if a plan eliminates some bus stops that are too close to other stops, the headline will be:

It’s possible to make this reaction worse by doing a poor job at engaging decision makers and the public at every step, but it’s not possible to make it go away.  Thus, I always have to remind elected officials at the beginning of the process:  “All network designs that don’t add new operating cost are controversial.  The more they try to achieve, the more controversial they are. Some people will scream at you. It may divide your own coalition. If you’re not up for that, let’s not even begin.”  This, quite simply, is why some really incoherent and wasteful ones are never fixed.

So what went wrong here?

The excellent blog Melbourne on Transit blog has a long post-mortem. I agree with most of it, and would add:

Still, it’s a struggle.  This may not have been the right design for Adelaide, but it’s unfortunate that after all that effort, they’ll get nothing.  An obsolete and inefficient network will always be popular among people who are used to it, but if that’s always a reason not to improve it, the whole city loses. 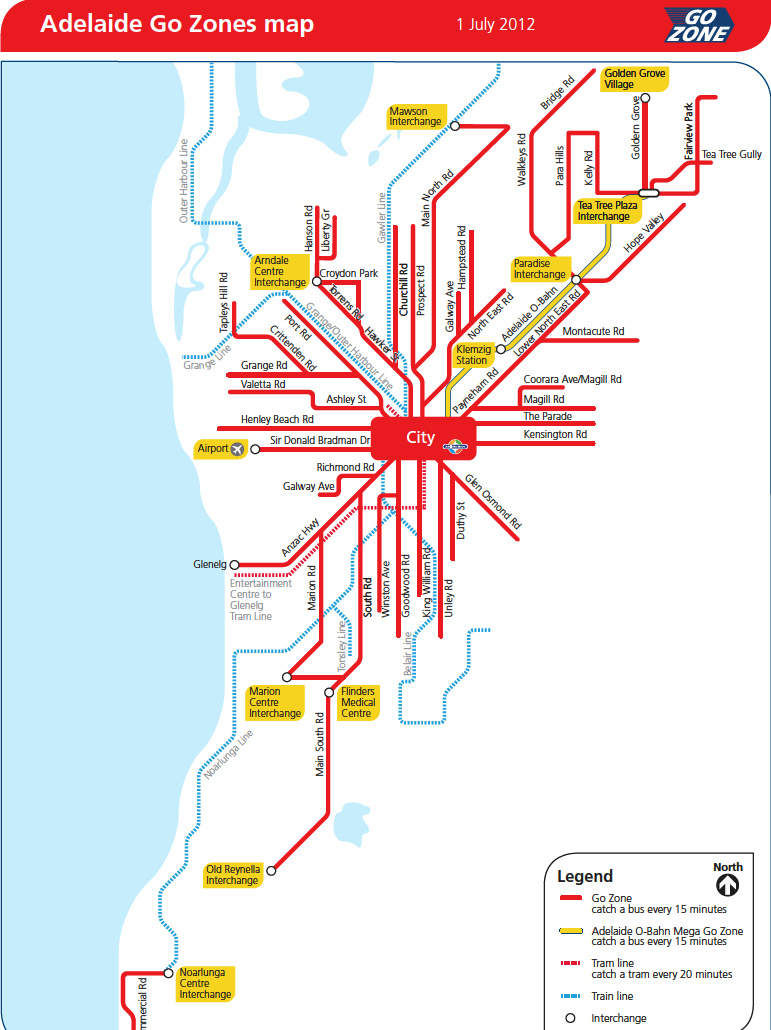 Locals are discussing it here.

Adelaide is a very centralised city, but still, it's extraordinary to notice that you literally can't go anywhere at high frequency without going through the CBD.  Only the stations of the O-Bahn, where routes converge from several directions to flow into the O-Bahn busway, is there any opportunity to make a frequent connection without going downtown.

Adelaide readers and citizens should think about the question: Do we really want it to be impossible to get around spontaneously — i.e. without much waiting — anywhere other than to and from the CBD? Since former Portland transit general manager Fred Hansen is now in Adelaide, I hope he is pitching the virtues of grid networks — which Portland has had since 1982.  A full grid is probably not appropriate for Adelaide's geography and resources, but radial systems with grid elements — which I've been designing for years — could open up vast new all-day travel markets.

You are here: Home › Adelaide