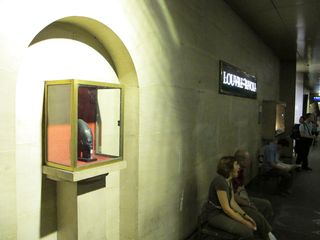 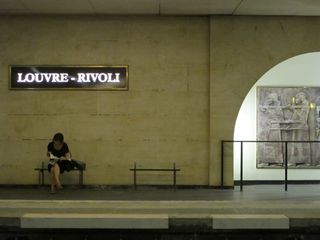 Next time you’re involved in a debate about whether we should consider taking one lane of traffic on a busy street and setting it aside for buses, show them some pictures of Paris today.  Almost any boulevard, in fact.  Here’s Boulevard Raspail: 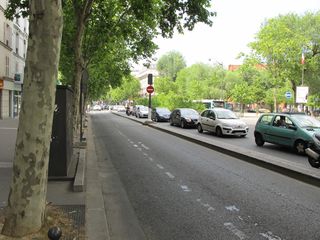 Lots of traffic in two lanes, and a lane reserved for buses and two-wheels conveyances.  Yes, the bus lane is empty at the moment, but this demonstrates the great and damnable paradox of bus lanes:  If buses are moving well, and carrying more people than the car lanes, the bus lane looks empty most of the time.  Only a failing or obstructed bus lane looks like it’s full of buses.  That’s why bus lanes are such a hard sell in cities run by motorists who want to do the green thing but still form their impressions from behind the wheel of a car.  END_OF_DOCUMENT_TOKEN_TO_BE_REPLACED

How completely can buses come to resemble streetcars/trams?  Paris has crossed one important line that North America still seems stuck on: off-board fare collection.  Have another look at a new Paris bus: 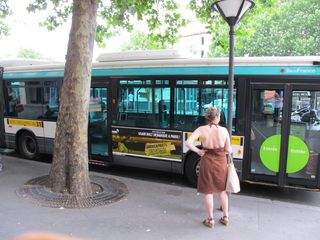 END_OF_DOCUMENT_TOKEN_TO_BE_REPLACED

I’ve seen a lot of transit logos all over the world, and this is my personal favorite. 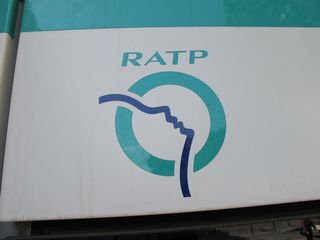 Perhaps one has to know Paris to appreciate it.  But that’s fine; it’s a logo for Parisians. END_OF_DOCUMENT_TOKEN_TO_BE_REPLACED

Have a look at this interior.  (Click, as always, to enlarge.)  Can you tell if it’s a bus or a streetcar/tram? END_OF_DOCUMENT_TOKEN_TO_BE_REPLACED

Why do transit planners love grids?  Now and then you’ll even hear one muttering about “grid integrity” or “completing the grid.”  What are they talking about?

Suppose you’re designing an ideal transit system for a fairly dense city where there are many activity centers, not just one big downtown.  In fact, you don’t want to give preferential treatment to any point in the city.  Instead, you want people to be able to travel from literally anywhere to anywhere else by a reasonably direct path, at a high frequency.  Everybody would really like a frequent service from their home to everywhere they ever go, which is pretty much what a private car is.  But money isn’t infinite, so the system has to deliver its outcome efficiently, with the minimum possible cost per rider. What would such a system look like? END_OF_DOCUMENT_TOKEN_TO_BE_REPLACED

Angus Grieve-Smith has posted a translation of an intriguing Le Monde interview of architect Roland Castro, one of the leading architects on a project for re-envisioning the suburban belt around Paris.

END_OF_DOCUMENT_TOKEN_TO_BE_REPLACED

The core branding idea of the Paris RER is a really powerful one.  Here’s
how it used to be presented, as a consistent citywide product
(click to enlarge; full-size map here):

END_OF_DOCUMENT_TOKEN_TO_BE_REPLACED 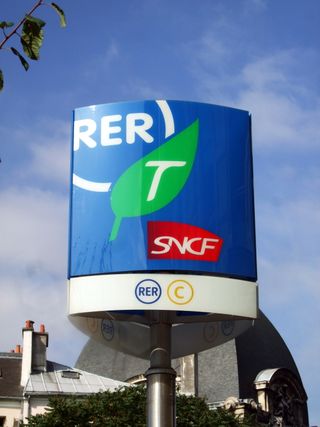 A lot has improved about transit in Paris since I was last there in 1991, and certainly since I lived there in 1986.  But I’m having trouble finding any positive angle on the partial re-branding of the crucial commuter rail and long-distance metro service, the RER.  Because Paris does everything on such an operatic scale, the new RER brands may offer a useful parable about the perils of agency-centered communications, especially in an era where European public transit operating companies are expected to act like private businesses. END_OF_DOCUMENT_TOKEN_TO_BE_REPLACED Alon Levy, guest-writing at The Transport Politic, recently did a great piece proposing that the New York region’s commuter rail lines, which currently all terminate in Manhattan, should be connected to each other so that trains would flow through, for example, from Long Island to New Jersey and back.  The inspiration, of course, is the Paris RER, a system in which commuter rail lines on opposite sides of Paris flow across the city into each other.  Because all these commuter trains, merged into a common city segment, add up to reasonably high frequency, the RER also serves as an “extra-rapid metro” connecting major centres across the city with trips making just a few stops.  Alon’s plan  (part one, part two) is a great read, as is Cap’n Transit’s response to it.

Such a system would be wonderful if it existed today.  Commutes from Long Island to New Jersey would certainly be much easier, and it would also be great to get the space-consuming and time-consuming end-of-line functions out of the core.